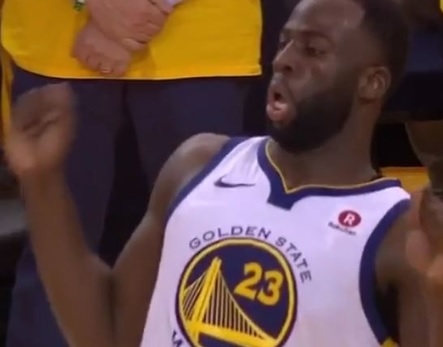 Draymond Green Tells Timberwolves Fan heckling him: “You Paid $500 for these Weak A** Courtside Seats, Shut Up”.

Draymond Green dissed a Twolves fan who paid $500 dollar for court side seats during game. As the fan heckled Draymond Green he responded,

Draymond Green was alluding to the fact that Timberwolves courtside seats are some of the cheapest in the NBA because of how bad the team is so far season. Warriors aren’t good this season either, but their court side seats can go for as much as $1,200 this season.

Draymond Green is a master trash talker, so heckling him usually won’t end well. It’s safe to say Draymond Green hit this fan where it hurts most.

Carmelo Anthony “I GOT IT” War Cry with One Second Left During Blazers vs...

Plies Sounding Like Cosmo from Fairly Odd Parents While Laughing to His WAP Remix...

Plies Sounding Like Cosmo from Fairly Odd Parents While Laughing to...