What would you do if saw someone’s house on fire? In most cases people would be acting frantically, because of the possibility of the fire spreading or people burning alive inside the building. However, a video recorded in Kotlas, which is located in the Arkhangelsk region of Russia shows people doing the opposite.

A viral video, which now has millions of views across social media platforms shows Russians calmly watching a house burn down in Kotlas. The video is strange, because it seems like the people who are right next to the massive fire don’t even notice it. The kids are playing on the playground like it’s a bright sunny day, their parents are there with them enjoying the weather, all the while there is massive fire right next to them and they don’t seem to care. Naturally social media is shocked at their reactions, which is why the footage has garnered so much attention.

Russians calmly watching the house burning in Kotlas Russia is like the real life version of the ‘This is fine’ meme.

There are no details on why the house was burning down or what started the fire, but there didn’t seem to be any type of emergency personnel on the scene. Still yet to everyone in that area it was like their was no fire at all, and they didn’t seem to have any sense of urgency in terms of trying to avoid the fire.

Some people think the only explanation could be that it was a controlled burning of some kind.

Ringside Angles of Kamaru Usman Knocking Out Jorge Masvidal After He...

Ringside angles of Kamaru Usman knocking out Jorge Masvidal after he taunted him in the second round... 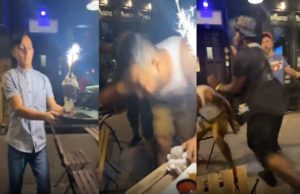