Larry Elder’s campaign for the Gubernatorial Recall election became the center of major controversy after an attack took place while he was campaigning in Venice California. As he was walking towards his car a racist white woman wearing a gorilla mask attacked Larry Elder, and punched his staffers a few times.

The footage shows the moment the racist white woman in a gorilla mask throws an egg at Larry Elder. When other people tried to intervene the woman caught his staffers with a few punches to their face, and warned them not to touch her.

At that moment more protesters started to get aggressive towards Larry Elder, and he was rushed to his car. This caused an abrupt end to his homeless encampment tour.

Who is Larry Elder aka Laurence Allen Elder?

Larry Elder is a conservative radio host, politician, and author. He is most known for his famous show “The Larry Elder Show”, which last aired in 2014.

He is now a candidate for the 2021 California gubernatorial recall election.

What is the 2021 California gubernatorial recall election?

The 2021 California gubernatorial recall election will decide if the current Governor Gavin Newsom will be recalled.

If it’s decided he will be removed from office, then a new candidate would be needed to replace him until the end of his term in January 2023.

Larry Elder is hoping to be that guy.

Did a Racist Liberal Attack Larry Elder With an Egg?

This situation has opened up an interesting conversation on social media, on whether the woman in the gorilla mask can be considered a racist liberal attacking Larry Elder. Although her political identity is unknown, she was going after a conservative politician.

Due to that fact conservatives on social media have used this opportunity as their proof that some liberals are racist, although racism is usually associated with conservative leaning people.

Is it really fair to jump to a conclusion like that in this situation? Is it possible to be for someone to be racist and liberal? 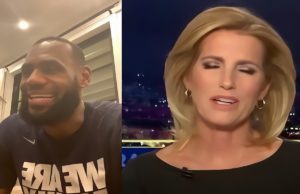 Do you ever wonder what Michael Jackson would have looked like in his older days if never underwent an extensive amount of plastic surgery?...