Protestors are at the doorstep of Army Sergeant Jonathan Pentland, but he is refusing to come outside. A few days ago a video went viral of Jonathan Pentland harassing a black man who lived in his neighborhood longer than him. A white woman in the neighborhood claimed he tried assault her according to story given by eye witnesses, but her story had many holes in it. Police investigation showed no evidence of that claim being true, and Jonathan Pentland was charged and booked in jail, but was released.

Fast forward to today and protesters were seen standing on Jonathan Pentland’s lawn asking him to come out and talk. The same guy who was seemed tough when he was harassing one of his black neighbors, seems scared now with all the protesters surrounding his house. His story is now making national headlines as an act of racism in case dubbed “Walking While Black”.

Here is a person in the neighborhood explaining what allegedly led up to Jonathan Pentland approaching the black man.

This was the video of the actual incident. Army Sergeant Jonathan Pentland allegedly broke the black man’s phone during this altercation. Notice how he wanted the black guy to tell him where he lives, but wouldn’t tell the black man where he lived when he asked the same question. Keep in mind they both live in the same neighborhood.

Jonathan Pentland claimed he isn’t racist, and this shouldn’t be deemed a racist incident in a now deleted social media post. However, it seems the entire world and law enforcement think otherwise.

Must Read  Did KSI Commit Suicide? Details Behind Rumor KSI is Dead in 2022

This was the true definition of someone making “walking while black” a crime. It’s sad what the young black man had to go through while strolling in his own neighborhood. 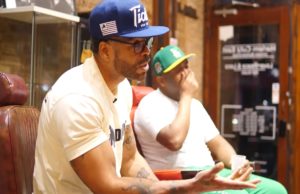 Whenever Kanye West is in the midst of releasing an album the excitement in the air can lead to some crazy moments. The mixture...