JordanThrilla
Home News Here’s Why Alexandria Ocasio-Cortez Accused Republicans of Wanting to Have Sex with...

In response to Steve Cortes’ tweet Alexandria Ocasio-Cortez claimed republicans are mad they can’t date her, and added that republicans’ sexual frustration led to them making fun of her boyfriend Riley Roberts’ feet. However, her comments came across as very strange for a politician to say, which led to hashtag #AocMeltdown (AOC meltdown) going viral.

The woman who usually keeps her cool became unhinged once her enemies mentioned her boyfriend’s feet, which is kind of hilarious all things considered.

In response to the criticism of boyfriend Riley Roberts’ feet and sandals, AOC wrote,

“It’s starting to get old ignoring the very obvious, strange, and deranged sexual frustrations that underpin the Republican fixation on me, women,& LGBT+ people in general. These people clearly need therapy, won’t do it, and use politics as their outlet instead. It’s really weird. If Republicans are mad they can’t date me they can just say that instead of projecting their sexual frustrations onto my boyfriend’s feet. Ya creepy weirdos.”

How Did AOC Alexandria Ocasio-Cortez Meet Her Boyfriend Riley Roberts?

Alexandria Ocasio-Cortez and Riley Roberts met backstage at The Daily Show. According to her story he was talking about Tax Rates in the 1950s when they noticed each other. It seems like their love for in depth conversations brought them together. Soon after they started dating he would move to Arizona to live with AOC, and the rest was history. He was even there when AOC got sworn in making history.

Considering how long they have been supporting each other in a way it’s not surprising to see AOC meltdown over republicans making fun of Riley Roberts’ feet in sandals. The whole situation is the epitome of political comedy. 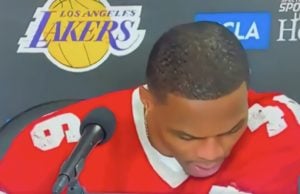 Reports have been swirling that singer Omarion and actress Nia Long are an item. The two were recently spotted holding hands on the red...

D’Angelo Russell Forgets He Checked into the Game Confidently Watching His Team Play 4 on...