When Drake and Lil Yachty were driving down a busy street, Drake had a special surprise in store for the rapper. He handed Lil Yachty a pack of Starburst Cotton Candy, though he did so in a very discreet manner. No one knew what Drake was really up to, as he presented the candy in a concealed container.

Upon receiving the pack of cotton candy, Lil Yachty was thrilled. He leaked text messages expressing his delight for the surprise, which revealed that Drake had just given him a pack of Starburst Cotton Candy, without anyone else knowing. In the text messages he said, “Look what da hood dropped off!!!”. Lil Yachty’s painted finger nails were in full view. The texts also revealed that Lil Yachty was forced to eat ‘Waigu strips’ in the past. It’s not clear if he meant to write ‘Wagyu Strips’.

Most people have never heard of Waigu Strips before. It’s highly possible that Lil Yachty meant to write ‘Wagyu Strips’, which might be referring to beef jerky strips, which are made from Wagyu beef flavored with spices and honey. Wagyu Beef is unique, because it’s made from a cross between purebred Japanese Wagyu cattle and American cattle, which leads to it being extra tender when cooked.

Many people who have eaten honey flavored Wagyu beef jerky think it is very nasty, which might be why Lil Yachty was forced to eat it. Of course ‘Waigu Strips’ could be referring to something totally different.

The act of Drake giving Lil Yachty Starburst Cotton Candy was meant to be a gesture of friendship, and it is an example of how Drake is willing to go out of his way to make people feel special. Some people feel this is proof they are best friends now.

Here is Proof Tyler Herro Boxing Skills Are Worse Than His...

Is Tyler Herro the worst boxer ever? Fans are going in on Tyler Herro's boxing skills after...

He Brought a Bazooka to a Street Fight? Man Pulling Out Bazooka During Traffic... 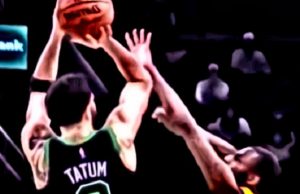