Jamal Murray Responds to His Tape Leaking on Instagram.

When a Jamal Murray adult tape leaked Instagram, many people were left in shock wondering how something like that could happen. That question now has been answered, as Jamal Murray responded to the leaked video of him and another woman.

Jamal Murray is claiming that he was hacked, which may very well be the truth, but people on twitter aren’t buying it. Many tweets were saying clowning Jamal Murray for allegedly posting other things on his IG to make it seem like he was hacked.

Most people figured Jamal Murray would say he was hacked, so it would of been hard for him to convince many people.

No one knows the truth for sure, but we do know there is a Jamal Murray adult tape that leaked today.

Why Did Kentucky Linebacker Deandre Square Push a Coaching Staff Man on His Own Sideline...

Have you ever seen someone get beat up twice at a Football game? That's what happened when...
- Advertisement - 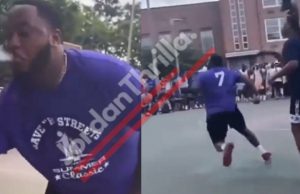