Donald Trump ROID rage conspiracy theory is going viral after doctors confirmed that Donald Trump is taking steroids. According to new reports Trump is taking Dexamethasone, which is a steroid drug used to suppress your immune system. It has shown to be helpful in severe cases of COVID-19. There’s one side effect about this drug that is common in steroids that may have been affecting Donald Trump this morning. Dexamethasone can cause MAJOR mood swings.

The rapid succession of tweets and the consistent use of all caps supports the theory that it was a Donald Trump roid rage in full effect. If you look closely at one point Trump was sending out a tweet almost every minute. Can you imagine how the fast his fingers had to be moving to tweet that quickly?

A roided out Donald Trump is a scary thought. Hopefully conspiracy theorists are looking too deeply into this Trump twitter rant, and it was just that. At the moment the Donald Trump Roid rage Conspiracy Theory is just a conspiracy, which is a good thing. However, it is fact that Donald Trump is taking steroids as treatment for his Coronavirus infection.

Arkansas Mother Found in Bed With Her 10 Year Old Son... 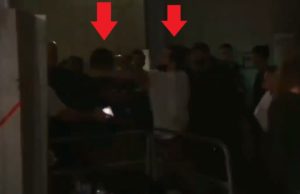 October 11, 2021
One of the most anticipated grudge matches in UFC history is officially going to happen. It was...