In this day and age with the exception of politics, propaganda is usually intelligently hidden within messages that seem non-biased. However, ever since the COVID pandemic has been raging on, propaganda promoting the vaccine has redefined how it is presented to its target audience. The messages seem so in your face, that people are quicker to question the truthfulness, or creation process behind a stories presented by the media. A recent segment by NBC News is being scrutinized as a sadistic form of propaganda by many people.

Is the “We’re Not Paid Actors” 12 Year Old Gets COVID Vaccine as Birthday Gift Story Fake or Staged?

NBC News published a video detailing how a 12 year old boy named Gavin Roberts had a wish of getting a COVID vaccine for the past year. That wish was granted recently when a nurse allegedly gave him the vaccine shot as a Birthday gift. They described how the loss of his father Charles Roberts who was a police officer, was the motivation of his COVID-19 vaccine birthday wish.

According to the story his father collapsed in May after catching COVID, and died about a month later. His mother blamed people not taking COVID-19 seriously at the time, and vaccine not being available yet. She alleged they want to share their story as way to help more people get vaccinated. The whole thing sounded like one big COVID vaccine commercial.

The reactions to the video, probably wasn’t what NBC expected. Many people expressed how they believe the 12 year old only spoke on Live TV about his father’s death, because the news station paid his mother to make him knowing they needed angle for vaccine propaganda. To them it seems cruel to make a 12 year old talk on Live TV about his father’s death just to promote the vaccine. People also thought the whole story was cruel, because it just didn’t seem plausible that 12 year old would be hoping for a vaccine shot as his birthday present.

What stood out most to people was the lack of emotion from both the 12 year old, and his mother who was stone faced the entire time. Considering they were talking about their husband and father passing away, most people were expecting to see some show of emotion. However, when they were talking it just seemed cold, no display of sadness could be seen. Even when talking about pulling the plug on him, they remained emotionless. When the boy’s mother said, “We’re not paid actors”, to many people it was like they were subliminally admitting they were paid by NBC.

At the moment the video has 16,000 dislikes compared to 4,300 likes. It’s not often you see a YouTube video with 4 times as many dislikes as likes, but this one has really angered anti-vaxxers, pro-vaxxers, and every one in between.

It would be good to know how the creation process behind this news segment developed. Did NBC reach out to this kid’s mom, or did they reach out to the news station? Whether the story is fake or real, it does seem a bit cruel for a 12 year old to talk about his father’s death on Live TV only because of the vaccine.

Stories like these won’t really help motivate people to take the vaccine, based on the reactions it actually does the opposite. One thing everyone can agree on is that this strange story is very depressing. 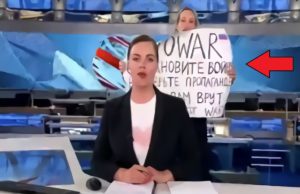 It's not often you see people speaking out against Vladimir Putin on Live TV in Russia. However,...

Did the Bank of Japan Just Break the World By Changing...

When Team Salvato and Serenity Forge revealed a new version of their legendary visual novel game titled Doki Doki Literature Club Plus would be...