JordanThrilla
Home News Why Did Joe Biden Lie about Going to Israel during ‘Six Day...

Joe Biden is going viral again for a comment he made during a speech, and as per usual it’s not for a good reason. This time Joe Biden was caught red handed making up a story about his past, but there is debate around whether or not he even knows that he lied.

During a recent speech Joe Biden was talking about his history with Israel, which led to a very strange claim. As Joe Biden was boasting about knowing every Israel Prime Minister since Golda Meir, he got a little too ahead of himself with his bragging. Joe Biden claimed that during the Six Day War Golda Meir invited him to Israel to be a liaison between she and the Egyptians.

The plot twist is that never happened. The Six Day War happened in June 1967 when Joe Biden was still attending Syracuse Law school. Maybe what Joe Biden meant to say is that he met Golda Meir just before the Yom Kippur War when he was a 30 year old Senator for Delaware in 1973. Surely the President knows the difference between the Six Day War and Yom Kippur War right?

All things considered hopefully he knew that he was lying, because if he didn’t that could more proof of cognitive decline. This definitely isn’t a good look for a President. 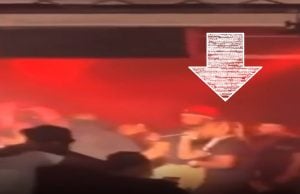 Was Post Malone High on Percocet Drugs While Performing ‘I Fall Apart’ on Stage?...

Floyd Mayweather coaching Gervonta Davis with real talk during his matchup vs Mario Barrios was tense, but it ended being the game changer in...