Tiffany Haddish and Aries Spears are two people you would never expect to be caught up in a pedophile scandal, but in 2022 it has been a year of unexpected things happening. According to a new lawsuit the two were involved in a production that made two underage children participate in adult film orientated skits. However, the two comedy superstars are already denying the allegations.

Are Tiffany Haddish and Aries Spears Pedophiles? Details on the Lawsuit Alleging Aries Spears is Gay an They Both Groomed and Molested Children

According to the lawsuit Tiffany Haddish and Aries Spears are being sued by a brother and sister who were 7 and 14 years old at the time the alleged incident took place. The lawsuit alleges that Aires Spears and Tiffany Haddish groomed the 7 year old and 14 year old the convinced them to film adult film oriented skits. What they were allegedly made to do sounds very horrific if true.

According to lawsuit after Tiffany Haddish groomed the 14 year old girl she was able to make her take part in a recording where Haddish instructed on her on how to pretend giving oral. In addition the lawsuit alleges that Tiffany Haddish brought the 7 year old boy to a house where she and Aries Spears molested the underage child while recording a ‘Funny or Die’ video called ‘Through a Pedophiles Eyes’. Of course these allegations could mean Aries Spears is gay if he really molested an underage boy.

According to the lawsuit the alleged molestation that took place has caused irreparable mental damage to both victims. The girl who was 14 years old at the time now claims she can’t date due to fear of being misled the same way Tiffany Haddish allegedly did to her back then. The 7 year old boy claims that he has to cover all cameras around him due to fear of being recorded and spied on.

According to a statement from ‘Funny or Die’ via TMZ the video in question does exist, but was uploaded to their platform as user generated content. They claim to have had no involvement in the creation process, and took the video down once they realized it was on their platform back in 2018.

Tiffany Haddish’s legal team has already responded to the pedophile accusations by labeling it an extortion attempt. They allege the mother of the two children named Trizah Morris has been building this case for years in an attempt to secure a large sum of money. They believe the lawsuit will backfire once an investigation shows that is it possibly bogus.

How crazy would it be if Aries Spears is gay child molester, and Tiffany Haddish was taking part in the pedophile activities as well. Hopefully this is really an extortion attempt. What is going on in 2022? 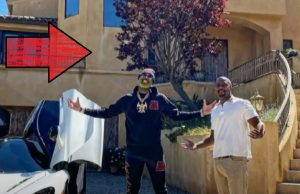 Africa is known as the motherland of planet earth, because it is believed human life originated from it's land. Still today it is the...