JordanThrilla
Home News Details on Why Alexandria Ocasio-Cortez Was Worried About Marrying a White Man...

Back in May AOC Alexandria Ocasio-Cortez confirmed that she and Riley Roberts got engaged during a trip to Puerto Rico. On the surface it seemed like she was completely sure about wanting to get married to her longtime boyfriend, but behind the scenes she apparently had apprehensions due to the differences in the cultural backgrounds.

Alexandria Ocasio-Cortez recently did a candid interview with GQ spilling beans about the internal thoughts she had about being with Riley Roberts who is a white man. In the interview AOC seemed to insinuate she wasn’t sure if a white man would be able to handle a multicultural relationship with her. Regarding her engagement she said, “The moment you start being yourself, they kind of freak out… I think it causes a conflict within them that they didn’t even anticipate. It’s not even a deception. It’s just, they uncover insecurities that they didn’t know were there”.

In essence it seems that she was afraid that Riley Roberts’ life experiencing as a white man would eventually get in the way of their relationship, because of hidden emotions he might not expect to have due to her ethnic background and confidence. Luckily for her it seems they haven’t ran into any issues, as they are still planning to go forward with marriage, and appear to still be happy in their relationship. In the past the two have been seen on social media discussing race and racism, so that entails they are having open discussions about the differences in their backgrounds from a cultural standpoint.

How Did AOC Alexandria Ocasio-Cortez Meet Her Fiancé Riley Roberts?

According to reports a long time ago Alexandria Ocasio-Cortez and Riley Roberts met backstage at The Daily Show. According to her story he was talking about Tax Rates in the 1950s when they noticed each other. It seems like their love for in depth conversations brought them together. Soon after they started dating he would move to Arizona to live with AOC, and the rest was history. He was even there when AOC got sworn in making history.

Some time ago AOC had to defend Riley Roberts’ feet in sandals after republicans clowned him on Twitter in viral posts. 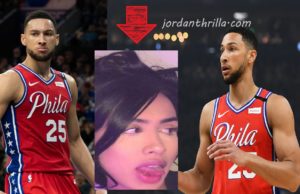 It's alleged that Ben Simmons setup a Sixers Gang bang on transgender woman named Amani. It was...

Gamers React to Annie Wersching aka Tess from ‘Last of Us’...

The world of the gaming and entertainment industry was rocked today by the tragic news of the...

The r/WallStreetBets server has become a very controversial topic ever since the unprecedented rise of Gamespot stocks that have made many rich. That continued...