Sad news has just hit the basketball world. Reports are coming in that Kentucky’s Terrence Clarke is dead after a car accident. Terrence Clarke was an NBA draft prospect, and had recently signed to LeBron’s Klutch Sports management company in preparation for the NBA draft.

In his freshman season for the Wildcats Terrence Clarke averaged 9.6 ppg, 3 rpg, and 2 apg. He battled a right leg injury that kept him from playing in games against the Southeastern Conference, but still was able to put up decent numbers. He was 6’7″ and 194 lbs with great length, the perfect prototype for today’s NBA.

His most impressive performance during his Freshman season came when scored a career high 22 points against Georgia Tech. This game really showed he had potential to be great at the next level.

According to police reports Terrence Clarke ran a red light while he was speeding. The car wreck killed Terrence Clarke after he struck a car making a left turn. He was the only person driving in his vehicle at the time. There are currently no reports stating Terrence Clarke was drinking when the accident happened.

This situation is very tragic not only because he was only 19 years old, but also because he was just getting ready to experience the NBA dream he had worked all his life towards. 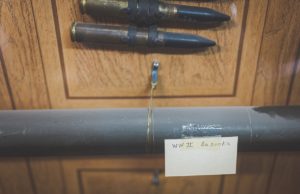 He Brought a Bazooka to a Street Fight? Man Pulling Out...

A man pulling out a bazooka at a stop light is an alarming situation that could easily...

The top story in the NBA world today was the surprising release of Spurs first round draft pick Josh Primo. Due to the vagueness...