The world’s most famous woman hater is back at it again, and this time black women were his target. In the viral video Kevin Samuels said 80% of black women are overweight disguised as “Thick”.

Of course what stood out most in this disrespectful segment was Kevin Samuels saying black women are overweight most of the time. He says most black woman that call themselves “thick” actually have unhealthy bodies.

Kevin Samuels has made a career of disparaging woman, so he is used to backlash that comes after his videos. There are definitely some “thick” women that are clearly just fat, but 80% seems like an overstatement unless you’re going by the controversial body mass index. There are plenty of “thick” Black women that are still in great shape. 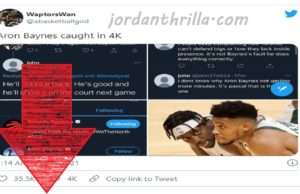 When you think of Michael Jackson the last thought that comes to your mind is how hood...

Back when companies were mandating COVID vaccines in many cases they didn't seem to care about the ample evidence showing the rare but deadly...

Scottie Pippen Son Antron Dead at 33: What Was the Cause of Antron Pippen Death?