When a well known celebrity makes a political statement there is almost always some controversy that ensues. That held true when Trump supporters attacked The Rock’s Instagram with hate messages after he endorsed Joe Biden and Kamala Harris.

The Rock has a diverse fanbase due to his career in wrestling and Hollywood, naturally you would expect that a large number of his fans are also Trump supporters as well. They weren’t too happy with The Rock cosigning Joe Biden and Kamala Harris.

Take a look at the disrespectful comments Trump Supporters left on The Rock’s Instagram page.

Almost 85% of the comments left where similar to the comments seen above. Perhaps The Rock has more Trump supporting fans than most people expected. Some Trump Supporters unfollowed The Rock after his Joe Biden endorsement, while others outright told him to stay out of politics.

The Rock surely lost a lot of his fans with his political statement, but he also gained a lot fans as well.

Given that The Rock is a fan of Joe Biden and Kamala Harris he probably doesn’t care how angry he has made those Trump supporting fans he has. Most likely he knew that drama would ensue by publicly announcing his political affiliation, or maybe he knew it would make his fans show their true colors. 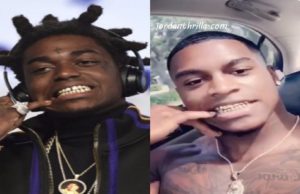 JordanThrilla - January 20, 2021
Back in 2019, a possible healthy Kodak Black Clone appeared around the same time Kodak Black plead guilty to federal charges and turned himself...

JordanThrilla - January 16, 2021
A Tay K vs Pablo Escobar battle is going viral. People are reacting to the picture of Tay K holding his wanted photo being...