JordanThrilla
Home News Here is Why a Fat Model at Footlocker Website is Drawing Criticism...

Most of the time when people think of a model, someone who is skinny comes to mind. Scientists often say that social conditioning is the culprit of that way of thinking. If you’re watching tv or reading through a fashion magazine there’s a good chance all the models will be skinny, but we all know that isn’t a true representation of reality. What happens when you go against the socially conditioned norm?

It seems Footlocker.com made a bold move, and used a heavyset woman to model a Nike athletic outfit. Not surprisingly she went viral as body-shamers around the internet expressed their thoughts about the fat model at Footlocker.com. Many people are accusing the media of going too far with the body acceptance movement. On the flipside proponents of the idea are calling it a very important and uplifting moment.

You’ll notice in the screenshot below that the pictures seem to accentuate the woman’s midsection to draw more attention to it. Also she is wearing workout gear, which seems to send the message that the fat woman in the photo is proud of her body, and also lives a health lifestyle. Ideologies that are a big part of the body acceptance movement.

Take a look at the fat woman at Footlocker.com, a possible new iconic moment in history.

It’s not often you see an overweight woman modeling athletic gear, and that’s definitely a serious underrepresentation problem. Hopefully the Footlocker.com fat model idea starts a trend of more large companies showing people of shapes and sizes some love in their picture campaigns. 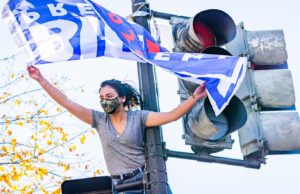 In the dating world some of the advice people hear most is never to discuss politics on...

Stephen Curry is enjoying life on top of the basketball world again, which means his wife is too. After three years of going through...