The black woman on TikTok exposed the reason most black people don’t know how to swim. According to her research it has a lot to do with the after affects racism and segregation, starting right from slavery.

To summarize what she said, she is implying that few generations of black people have a subconscious fear of swimming, and swimming pools. According to the TikTok user, Jim Crow laws in the 1920’s, which segregated pools and beaches were the foundation that ingrained this fear.

It appears white people would come to the pools designated for black people and throw acid or cleaning supplies into the water while kids were swimming. This led to widespread fear and paranoia in the black community, and black people began to avoid pools or any type of swimming activities.

Where do most people learn how to swim? Usually through parents or older relatives. So in many black households you had parents and relatives whose fear of swimming kept them from teaching younger generations how to swim.

The trickle down affect is now the alleged stat saying 64% of black people don’t know how to swim today. 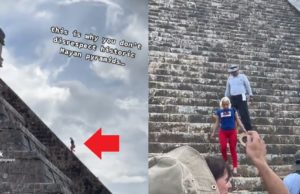 Lil Boosie was involved in another shooting, but this time he got very lucky. Viral footage shows the moment the shooting at Lil Boosie's...