When people think of women turning down men trying to flirt with them at parties, most of the time you imagine her walking off, or simply saying she’s not interested. However, in one case a man almost got his neck broken by a woman that seemed to have superhero strength. In viral footage posted by TikTok user @abelvaldez04, a woman power slammed a man who started twerking on her at a party.

The woman wearing a dress was dancing in peace alone, when out of nowhere some guy starts gyrating on her. He would quickly learn he made one of the biggest mistakes of his partying life when the woman slammed the dancing man into the concrete floor like a wrestler. The man was clearly in pain, and also embarrassed. His manhood basically got taken from him in front of large crowd, and it was all his fault.

Right at this moment the guy was probably having a “how did I get here” moment. The only thing in his view was the ceiling lights.

That woman should be calling up WWE for a contract, because that was a masterful slam. It seems she knew exactly how to drop him in a way that it hurt him without causing injury. That guy will probably never disrespect another woman like that again.

This might be the first video in history where a woman slams a man who tried flirting with her at a party. 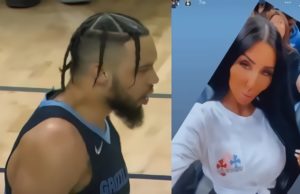