ASAP Rocky is a man of many hats. He is a great rapper, actor, designer, and a ladies man among other things. Apparently he is expounding his abilities once again this time dabbling in the world of gaming. His alleged appearance in a new Need For Speed game has social media buzzing.

When you think of car sounds in video games most people don’t think the effects are made by people’s voices. In regards to car horns the only widely known instance of someone’s voice being used to mimic the sound might be the person who voices the Road Runner cartoon character. However, that all changed recently when it was discovered that ASAP Rocky voiced a car horn in Need For Speed Unbound allegedly. Take a listen.

For the developers of the game this is genius, because so many people are going to buy or rent it just to experience what it feels it like to drive a car that uses A$AP Rocky’s voice as a horn.

Did a Chinese Spy Balloon Fall From the Sky After an...

Today, videos of a massive sky explosion in Billings Montana sparked a conspiracy theory that the US... 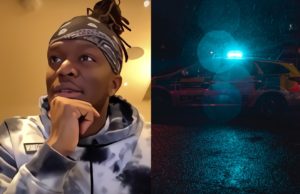 The Los Angeles Lakers have become the NBA's punching bag when it comes to getting easy wins, and that remained true against the Timberwolves....