In a 20 minute video explaining why his wife was leaving him, he explained how up until this moment his wife largely avoided the internet. She had no social media accounts, but one of his enemies let out the secret on how you can find her information. The person in question revealed her full name to people on the internet, and let them know you can find her through google search. The was only the start of situation that would get worse.

Hassan Campbell claims that people out to ruin his life called child protective services on him using false claims that he was beating his children and starving them. This impacted his wife more so than him, because he says she works at a city job with children. This led to situation where she had to prove she was a competent parent to save her career, which is still in jeopardy. His wife was making over $100,000 a year.

Hopefully he can save his marriage, and keep his family safe now that all his information is out there. 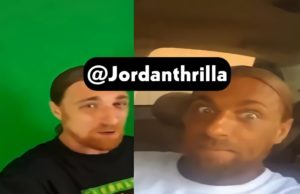 White Man Gets Experimental Tanning Injection Drug and Turns Himself into...

A white man turned himself black with the help of a new tanning injection drug in a...