High schoolers video from 2001 at GHS on their final day before 9/11 and pre social media compared to a video of high school in 2019 is shocking. The 2001 footage gives an intricate look into what life was like for teenagers before the hellacious world of social media took over.

During the 2001 era most of things we are accustom to having such as a twitter account, Facebook, and cellphone were almost non existent. This was also before the tragic September 11 event that also changed the world as we know it.

It will be strange for a lot of people watching the 2001 high school video to see no one walking around with their head stuck down looking at a tiny screen as we are used to seeing today. This was only 20 years ago, so most of the people in this video are in their late 30s or early 40s today.

What stands out most about this video is how it seems like every single person had their own unique style and way they carried themselves. In this day and age social media has created a “hive mentality”, which cancelled out a lot of the uniqueness people used to have. Nowadays large numbers of people follow trends, which makes everyone seem alike.

For those who were in high school back in 2001 this video will give an ultimate feel of nostalgia, that might make you miss the good ole days. 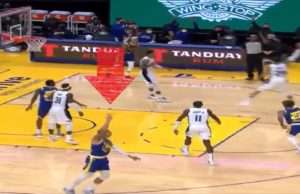 When it comes to NBA couples Lebron James and his wife Savannah seem like one of the perfect examples of two people remaining faithful...