JordanThrilla
Home Sports The Players and Team Staff Ejected for Fight During Bryant vs Syracuse... 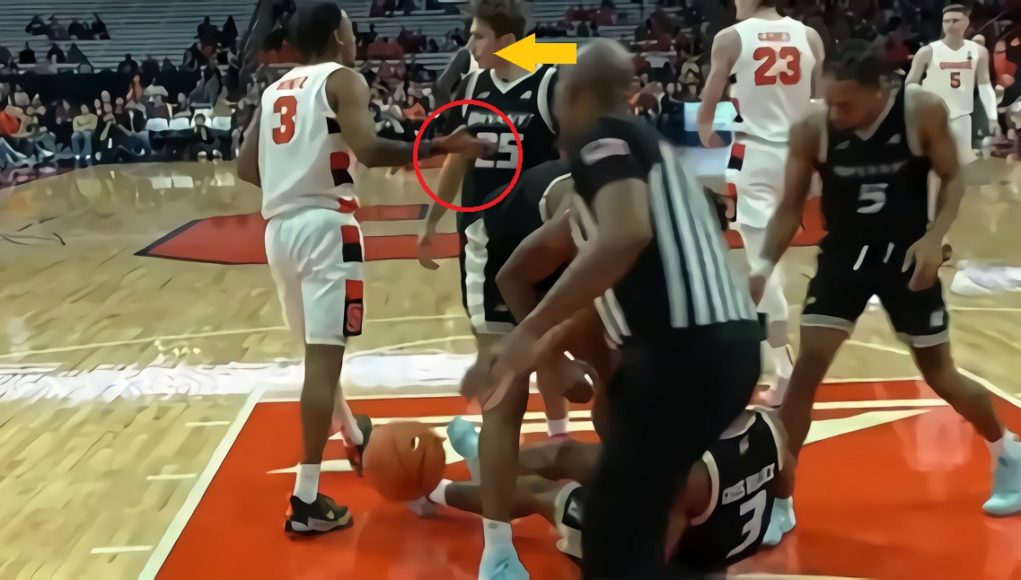 Bryant vs Syracuse was the most intense NCAA game of the game of the night, and things got a bit too hectic during some trying times. There’s something about getting slapped in the face that seems to really tick some people off. Some people truly believe that someone slapping them in the face is more embarrassing than getting punched. A slap was the core of the tense situation that led to multiple ejections.

Why Did Judah Mintz Slap Doug Edert During Bryant vs Syracuse Starting a Massive Brawl?

Judah Mintz number 3 for Syracuse is a 6’3″ freshman guard weighing in at 175 pounds. His opponent was the 6’2″ Bryant guard number 25 Doug Edert, who weighs in at 185 lbs. One had a height advantage, while the other had a weight advantage. After players made a hard collision resulting in a foul call, Doug Edert pushed Judah Mintz almost causing him to trip over his teammate. In response Judah Mintz just walked up to Doug Edert and slapped him in the face. As he was walking away Edert retaliated by slapping Mintz in the side of his head. Naturally the fight resulted in both teams to charging each other.

After the scrum referees handed out the ultimate punishment to both players on the court, and team staff members that are usually on the sidelines. From Syracuse Judah Mintz, Adrian Autry, Allen Griffin, and Pete Corasaniti were ejected. From Bryant Doug Edert, Tyler Brelsford, Kvonn Cramer, Phil Martelli Jr. and Chris Cole were ejected. Bryant had 3 actual players get ejected compared to only one from Syracuse.

Judging from the footage NCAA was close to having their own version of the Malice in the Palace between Pistons and Pacers from all those years ago. The commentators knew it was about to go down once they saw Doug Edert slap Judah Mintz while he wasn’t looking.

Multiple players got ejected, but could there be suspensions on the horizon as well?

Yesterday news broke that Bob Saget is dead at age 65. His death is very mysterious due to unknown circumstances surrounding the situation, and...