A Spirit Airlines fight at a Detroit Airport is going viral. The footage shows a heavy set man beating up a much smaller person immediately after they got off their flight. Airport security representatives claim an argument that happened on the flight is what led to the fight.

Police reports state one person in the footage below was charged with assault, but they haven’t clarified which person. However, judging from the video it’s easy to see who was the person getting assaulted. Security personnel are worried, because this brawl continues a recent trend of fights happening involving Spirit Airlines passengers.

The sad part about this footage is the fact that no one tried to step in a break the fight up, including security. It was clear the smaller man could have been killed, but people just stood by and watched. Luckily, after some time brave people finally came by and were able to stop the beating.

In recent months there have been Spirit airlines fights in Florida, and one incident where Spirit Airlines passengers attacked airport employees. Spirit Airlines is known for having the lowest flight prices, but also the lowest quality airplanes.

It appears the chance of getting fight comes at the cost of those low prices. 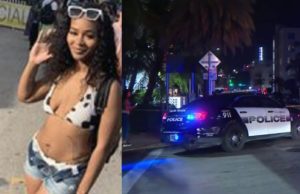