Just about everyone has heard the term “White Privilege” before. Some people claim it doesn’t exist, while others see the clear proof of it everyday. The term describes the theory that having white skin allows you get away with certain controversial things, and gives you opportunities in life that a minority wouldn’t have. Kanye West has insinuated that Pete Davidson is an example of “white privilege”, and now social media is starting to agree after an old video resurfaced.

We all know Pete Davidson’s gimmick is being edgy by doing and saying things most people would be afraid to. However, there are still lines that shouldn’t be crossed, but he seemingly gets away with crossing those lines for some reason.

A perfect example of this is a viral video where Pete Davidson makes pedophile jokes while doing a stand up comedy set for a crowd.

In the strange video Pete Davidson talks about his friend’s baby that is teething. The term ‘teething’ is used to describe when teeth first come through a baby’s gums. One of the major symptoms of teething is the baby want to chew or suck on things, which is believed to help relieve the pain they are going through. This was the core of his inappropriate joke.

Pete Davidson’s pedophile joke vibes began when he started talking about the his friend’s baby sucking his finger. He described how it felt so good, almost like he was comparing it to someone giving him top. Naturally when someone posted about the footage on Twitter it sparked a viral debate about “White Privilege” being reason he never got backlash for this.

Take a look at the tweet and video in question.

While watching that video ask yourself this question, would a black comedian get away with making a pedophile joke like Pete Davidson did? If Kevin Hart or Dave Chappelle started making jokes about getting pleasure from a baby it would likely spell the end of their careers.

The most shameful thing about the video above is the audience that’s laughing at such a disgusting joke. Considering what was said it’s no surprise Kanye West is very worried about Pete Davidson being near his kids. 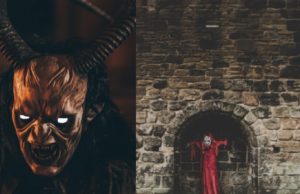 Is Lil Nas X a follower of Satan, and why is Nike promoting Devil worship? Lil Nas...

Warriors injury woes may have just gotten worse. After getting shut down, Stephen Curry injured his ankle...