NBA Youngboy has one of the most devoted fanbases in Hip-hop history. This is evident by the incredible streaming numbers he has amassed on places like YouTube even before his music was being promoted by major labels. Naturally his fanbase has people of all demographics, but his most devoted followers may be the youngest fans.

TikTok user officia1_dre recently uploaded a video of his alleged little brother doing something that can only be described as a bit crazy. His brother is a 7 year old NBA Youngboy fan that hates Lil Durk with a major passion.

In the footage the 7 year old is watching a Lil Durk video while screaming that TV screen calling him wack. It looked like a scene from an episode of the Netflix show “Black Mirror”, where people become too connected with technology.

Hopefully, the TikTok user didn’t tell his little brother to pretend he was screaming at the TV screen just to make a video. Assuming that the video isn’t staged, it’s frightening how invested that kid is in being an NBA Youngboy fan.

It’s never healthy when someone becomes that intertwined emotionally with celebrities. That 7 year old NBA Youngboy fan is another example of how influential his music is. 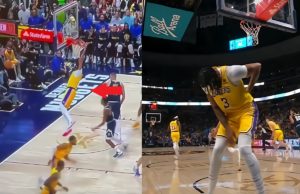 Most people know that Hurricanes can displace animals whether they live on land or water, but a case in Louisiana has never before been...

Chris Paul Free Throw Contest With His Son Might Be One of the Greatest NBA...