Since the COVID Vaccines were made available to the public there has always been controversy regarding how safe they really are since they are based on mRNA technology that had not been widely tested before releasing it to the general public. Over the past few years the world learned the potentially deadly side effects it can cause, and many people believed those side effects were underscored to make the vaccines appear safer than they really are. Now a recent report from US Life Insurance companies that was focused a drastic change they noticed in 2021 is making conspiracy theorists wonder if the COVID vaccine did more damage than medical companies were reporting.

Are COVID Vaccines the Reason U.S. Life Insurance Companies are Reporting a 40% Increase in Deaths Among 18 to 49 Year Olds in 2021?

Recently Emergency medicine and Disaster Specialist Kelly Victory was on Live News detailing at study done by US Life Insurance companies which showed that deaths among 18 – 49 year old people had increased by 40% over the past year. Kelly Victory became aware of this troubling data after a hearing with Senator Ron Johnson that was focusing on how the United States responded to the COVID pandemic. The information regarding the 40% increase in deaths among 18-49 year olds was pulled from a military database that collect ICD diagnosis codes related to deaths, meaning the data is presumably very accurate.

In this study a group of physicians looked back through data from the past 5 years. They compared the data from 2016 through 2020 to medical data from 2021 with a focus on many medical conditions, but most notably heart attacks, blood clots, and miscarriages. What they discovered was that there was 40% increase in deaths related to these type issues among 18-49 year olds in 2021. Now if you look closely you’ll notice that these medical conditions are also well known COVID vaccine side effects, some of which were seen in Pfizer clinical trial documents that the FDA was forced to make public after a long court battle.

US Life Insurance companies are saying they can’t explain the 40% increase in deaths among 18-49 year olds in 2021, but if you connected the dots you could argue that one major factor that changed in 2021 was the massive amount of people in those age groups getting COVID vaccine shots. In addition that age group was also the most susceptible to side effects. Remember Nordic countries even banned some COVID vaccines at one point due to heart related issues they can cause.

Take a listen to Kelly Victory talking about this strange situation.

BREAKING: U.S. life insurance companies have said that deaths have an unexplainable increased by 40% in 18-49 year olds.

Here is the full video

What ever the truth is behind this situation it’s very scary. Hopefully this isn’t a trend that continues on in 2022. 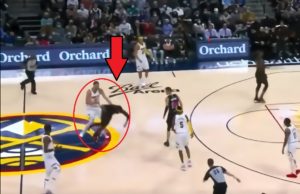 Nikola Jokic and Markieff Morris were both ejected from Clippers vs Nuggets after an altercation that started...

If you needed motivation to get in the gym this might be it. A 70 year old Chinese man who looks 30 years old...