Home Conspiracy Theories Eminem Died in 2006 and his Bone Samples were Used to Create...

Eminem Died in 2006 and his Bone Samples were Used to Create a Clone Eminem according to Conspiracy theory. RIP Eminem?

A new conspiracy theory is going viral. The theory is Eminem died in 2006 after an overdose, and his bone samples were used to create a clone.

A song by Tom MacDonald explains that the Illuminati, took bone samples of many famous rappers, so they could silence them from starting societal movements, then clone more “obedient” versions of them.

Eminem was one of the targeted rappers.

This would explain the drastic change Eminem after 2006. He was almost like a completely different person. The “normal” Eminem we are use to seeing today, could possibly just be a clone. 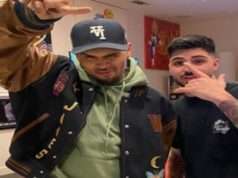 JordanThrilla - January 13, 2021
The biggest story in the NBA right now is Kyrie Irving refusing to show up for NETS games. People everywhere have been asking what...