Nicki Minaj husband’s legal woes that started way back in 1995 when he was 16 are rearing their head again. Kenneth Petty plead guilty to failing to register as a $ex offender during a court hearing with the U.S. District Court for the Central District of California. Based on the details of his case he had plenty of time to do so, but for some reason never did.

According to multiple reports the state of California first learned that Kenneth Petty didn’t register as $ex Offender in their jurisdiction after he was pulled over by cops in 2019. After doing research they found he was only registered in the state of New York.

Back in 1995 Kenneth Petty was charged with $exual assaulting a 15 year old girl named Jennifer Hough. Nicki Minaj defended her husband by claiming that Jennifer Hough was his girlfriend, which still doesn’t make what he did he right. However, the victim claims that she and Petty did not have a relationship together when the incident happened.

Over the past few years Nicki Minaj has been facing constant backlash for supporting and marrying registered $ex offender who allegedly did such a heinous crime.

Just recently Kenneth Petty’s accuser Jennifer Hough filed a lawsuit against Nicki Minaj and her husband, alleging they have been using scare tactics to pressure her into rescinding her $exual assault allegations. She even claims Nicki Minaj offered her $500,000, which she turned down.

Her refusal of that $500K offer speaks volumes about the truth of her allegations, and the fact that she wants justice served.

Kenneth Petty’s sentencing is scheduled for January of next year. If he is found guilty he could be in prison until 2032 when he will be 53 years old. His son Papa Bear would be 10 years old by the time he was released.

For Nicki Minaj this situation is probably stressful, but she knew what she was getting herself into. Hopefully everything works out in a way that’s best for their child, and the victim Kenneth Petty allegedly assaulted. 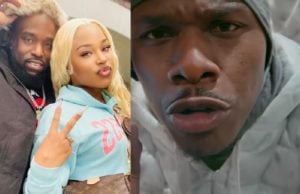 A bright sunny day in Devonport Tasmania Australia turned into a nightmare scene when the most unexpected thing happened so quickly that all people...