Is Drake smashing Amari Bailey’s mom Johanna Leia, or is he working on it? Drake has been regular at Bronny James’ games this season, but people think he has an ulterior motive besides supporting Lebron James’ son. Viral footage showed Drake standing behind Amari Bailey’s mom who is extremely curvy, and it seems like he was caught eyeing her.

Physically Amari Bailey’s mom is exactly the type of woman Drake seems to like. She’s tall, very curvy, and older than him. Given the Johanna Leia is 40 years old, she fits all three categories. Take a look the evidence fueling the conspiracy theories.

On Instagram Amari Bailey’s mom posts many pictures showing off her body. She has almost 98K followers, so she was already kind of famous before going viral today.

Johanna Leia is most known for her appearance on the Lifetime reality series Bringing Up Ballers. Before television she was a famous model, and has amassed an alleged net worth of around $5 Million. She also started a youth basketball camp way back in the day, that set her son up for success. Amari Bailey’s father was former football player, so he was truly born to be an athlete. 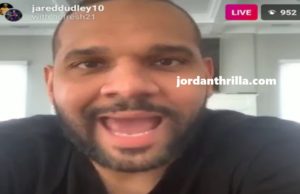 Jeopardy is under fire for an allegedly racist incident during a recent episode. Jeopardy contestant Kelly Donohue used a white power gang sign to celebrate...