Cardi B and Akbar V are currently in the midst of a heated back and forth on social media, and things got really personal. What started as a conversation about music went to a really deep place when people’s kids and parenting came into the mix. Social media was not happy that Cardi B took it there.

Why is Cardi B Arguing with Akbar V on Twitter?

The allegations of Cardi B not writing her raps has been a topic of discussion for a long time. People who criticize her music mention that as one of the main reasons they believe she isn’t a true talented artist. It’s not often you see celebrities call her out on this, but Akbar V is one of the main ones that isn’t afraid to on a public platform. Today on twitter she brought of the ghostwriting topic again it really got under Cardi B’s skin, which made her take things a little too far in many people’s eyes.

As you’ll see in the series of tweets below Cardi B mentioned Akbar V kid’s while claiming that she wasn’t a good parent. This led to some intense reactions from people on social media who believe it was hypocrital for Cardi B to talk about Akbar V’s kids after she herself has complained about people mentioning her daughter.

In the most viral tweet regarding Cardi B speaking on Akbar V’s kids and parenting a twitter user wrote, “Cardi is a hypocrite she’s speaking on Akbar V kids unprovoked, but that’s the same exact reason she tried to attack Nicki at NYFW in 2018 over an alleged photoshopped tweet about her parenting”. Cardi B also complained about The Shaderoom talking about her kids in the past.

In this era of hip-hop it doesn’t like people care about rappers not writing their raps, which became most evident when Meek Mill exposed Drake secretly using ghostwriters. Social media hailed Drake the winner of that beef after he released the “Back to Back” diss track despite the fact it’s possible he didn’t even write it, which is a crazy paradox when you really think about it.

Must Read  Is Rapper Webbie Dying? Video Shows Webbie Having Seizure, Throwing Up, and Collapsing at Concert

There was once a time when a rapper needed to be talented at the writing part of the creation process to be considered a true great. In that sense Akbar V criticizing Cardi B for using ghostwriters has some merit. However, it still takes talent to be able to sound good on track even if you didn’t write the words you’re saying. Nevertheless Cardi B didn’t have to mention Akbar V’s kids since in the past she was mad about people doing the same thing. 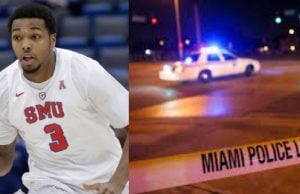 In the sports world athletes have to deal with words being put in their mouths all the time. One the biggest culprits of that...