Online predators are an unfortunate reality in today’s world, and their actions can have disastrous consequences for vulnerable victims. Recently, viral video footage of rapper White John confronting a predator in a Walmart has highlighted the valiant efforts of those fighting against this growing problem.

How the White John Fight vs Child Predator Fight Started

White John, an up-and-coming rapper from Inglewood, California, was at Walmart when he caught wind of the predator trying to meet a minor. He approached the the alleged pedophile and exchanged words, which led to a very one sided fist fight. The video of White John fighting the predator quickly went viral, with many praising his quick thinking and bravery. The situation could have easily gone in a different direction, if he hadn’t intervened.

Unfortunately, this is not an isolated incident. According to the FBI, more than 600,000 predators are active on the internet every single day. They use various tactics to lure unsuspecting children and adults into dangerous situations, such as offering money or gifts, sending explicit photos, or threatening violence. It is up to parents, educators, and other adults to remain vigilant and recognize the signs of predators in order to protect their loved ones.

White John is promoting the message that we must make it clear to predators that they cannot be allowed to continue preying on vulnerable victims without consequence. White John’s courageous actions are a testament to the power of individuals to take a stand, and make a real difference in their communities.

White John’s story serves as a reminder that we must remain mindful of the dangers of online predators. There are many resources available for those who are concerned about their safety. If you or someone you know may be in danger, make sure to contact your local law enforcement agencies.

Why Did Mo Bamba Try Choking Out Austin Rivers and Throw... 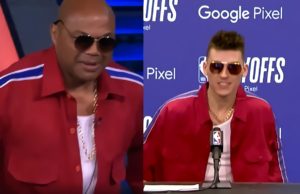 Inside the NBA is always must watch television, because on each episode something unexpected always happens. With...

Going into your freshman year of high school most men are still just coming out puberty, and bragging about their first beard hairs growing...