According to his testimony, fans ripped out Lil Uzi Vert’s Pink Diamond after he jumped into the crowd at Rolling Loud back in July. Luckily for him he was able to recover the diamond, but will no longer put it on his forehead. After having it forcibly ripped out, can you blame him?

Here are some photos from when he first revealed the J.A.R.V.I.S. like diamond on his forehead.

It’s not clear how Lil Uzi Vert got his ripped out diamond back, but some fan was probably dealt with by his security. It’s surprising that no stories broke back in July when it actually happened, but Lil Uzi Vert might have been embarrassed about ordeal, so kept it under wraps.

The good news is Lil Uzi Vert says the area where the Pink Diamond was ripped out by fans feels good these days. He does have a scar there though. 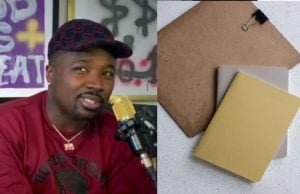 We may have a new winner for pass of the year, and his name is Jamal Murray. During Nuggets vs Grizzlies Jamal Murray's behind...

Kanye West’s Says Celebrities are Being Bullied into Cancelling Him as Jaylen Brown and Aaron...