JordanThrilla
Home Sports Why Was Lebron James On His Phone During Lakers vs Wizards? People...

When players are sitting on the sideline with injuries you usually see them watching the game. Sometimes the camera might catch them dozing off. What you almost never see is a player on his phone during NBA games, but that rarity happened today. The cameraman caught Lebron James on his phone during Wizards vs Lakers.

Why Was Lebron James using his phone during Wizards vs Lakers?

Based on how fast his fingers are moving in the video, it’s possible that Lebron James was texting someone. Some people think that Lebron was texting a side chick. Given that Lebron James touts himself as student of the game, it’s hard to believe he would disrespect the game like on Live TV. It’s much more easy to believe that something urgent with his family must have happened that gave him no choice to be use his phone on live tv.

Will the NBA fine Lebron James for using his phone during an NBA game?

These days the league executives seem to fine NBA players for any and everything. 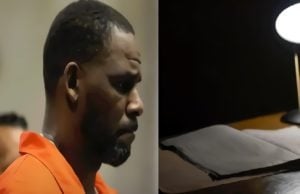 Floyd Mayweather coaching Gervonta Davis with real talk during his matchup vs Mario Barrios was tense, but it ended being the game changer in...