A strange happening is afflicting Soccer players that coincides with vaccine mandates that were put in place. During a recent Real Madrid Champions League match FC Sheriff Tiraspol star Adama Traore collapsed on the field holding his chest in severe pain. Luckily he survived the incident as paramedics were able to awaken him, and he was sent to the hospital for further testing.

Did COVID-19 Vaccine Cause Adama Traore To Collapse with a Heart Issue?

Before 2021 and vaccine mandates, Soccer players collapsing on the field was an extremely rare occurrence, but now it has become much more common. In fact according to a report from Dr. Yaffa Shir-Raz, cardiac deaths on the FIFA soccer field have increased by 5 times the normal rate. This doesn’t include players like Adama Traore who luckily survived, which would make the increase even greater.

At the moment doctors haven’t explained why he collapsed, which has left people wondering if a COVID vaccine side effect caused Adama Traore’s collapse with a possible cardiac event.

Why Did TalkSPORT Cut Live Feed of Trevor Sinclair Asking if COVID Vaccine is Linked to Soccer Players Collapsing?

With evidence showing a drastic increase in deadly heart issues for soccer players, one brave sports anchor asked a question most sports broadcasters would be afraid to ask on Live TV. The night before Adama Traore collapsed, Sheffield United star John Fleck collapsed on the field in similar fashion. In his case he had to be taken off the field on a stretcher for further evaluation.

Did COVID vaccine cause John Fleck to collapse too? That was the million dollar question the world wanted to know, but media giants didn’t want that question to be answered on live tv.

During the Live Broadcast John Fleck’s collapsing incident, TalkSPORT cut off Trevor Sinclair’s feed when he asked if John Fleck took the COVID Vaccine prior to his heart issue. It was similar to how ESPN cut off Jay Williams when he attempted discussing how some Nordic countries banned the Moderna Vaccine for people 30 years and younger due to studies showing adverse heart reactions were happening more often than initially reported, although still a relatively rare side effect.

Since TalkSport cut Trevor Sinclair’s live feed asking about COVID vaccines being linked to soccer players collapsing from heart issues, he took to Twitter to make sure his voice was heard. In his statement Trevor Sinclair said,

“Everyone I speak to about these heart problems suffered by footballers (which worryingly seem to be happening more regularly) are they linked to covid vaccines or not??”

Of course his tweet went viral, because this is an important question that would be beneficial for society to know.

The trusted German newspaper Berliner Zeitung recently wrote a report on the sudden increase of soccer players collapsing seeking to find an answer to what is causing this scary trend. If it’s true that COVID-19 vaccines are causing Soccer players to collapse it seems media outlets are going to try and cover up the evidence by silencing anyone who asks on their broadcasts.

The fact that Trevor Sinclair was cut off on Live TV when asking a valid question concerning this issue could be proof of that.

The world is waiting to see if doctors and scientists will confirm or debunk if COVID vaccine is connected to Adama Traore, John Fleck, and other FIFA soccer players collapsing on the field.

Surgical summer is on the horizon and an Ace Hood Ab Implant Conspiracy Theory may be the...

Kwame Brown Responds to Gilbert Arenas and Stephen Jackson Clowning Him on ‘All The Smoke’... 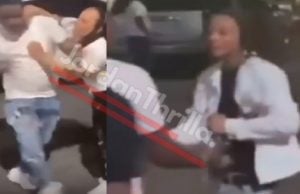