Whenever hip-hop legends get into an altercation it always makes the top of hip hop news headlines. That trend continued when cameras caught a tense situation unfold between Z-Ro and Trae The Truth’s crew on a busy street. It seems Z-Ro got the worst end of their dust up, but the footage shows it clearly wasn’t a fair fade like people were expecting.

Is it honorable to jump someone instead of fighting them one on one if you have issues? That question is at the center of most conversations surrounding the leaked video of Jay’Ton and Trae The Truth’s crew beating up Z-Ro. As you’ll see in the video below, which shows the aftermath of the incident Trae The Truth’s crew jumped Z-Ro with the help of several people. Z-Ro was on the ground being used as a punching bug in the fetal position.

After police arrived Z-Ro was able to get up, and still wanted all the smoke. However, the police pulled out their tasers, and stood between them so the situation didn’t escalate further. When Z-Ro tried squaring up you could see Trae the Truth’s crew ready to launch another unfair beat down. Does Z-Ro take an L for this, or do Trae the Truth and Jay’Ton take the L for not giving him a fair fade? Some people feel everyone lost in this situation. Take a look at how it went down.

Some people who are clowning Z-Ro think he tried fighting back only when he knew that police where there to protect him, similar to how some NBA players wait for people to hold them back before acting like they want to throw hands during in game altercations.

However, before this situation went down Jay’Ton was talking about giving him a fair fade on Instagram, then proceeded to have Z-Ro jumped when they actually crossed paths. Many people are saying this is a bad look for the Houston hip-hop scene. 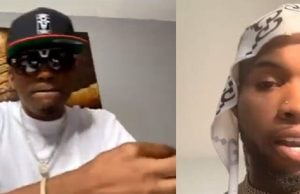