Odell Beckham Jr taking his shoes off during Steelers game talking trash to Browns fans is going viral. On the game vs Steelers Odell Beckham Jr had 2 catches for only 25 yards, monstrous stats indeed.

Naturally Odell Beckham Jr took his shoes off knowing he could relax after his amazing performance. Odell Beckham Jr started talking trash to the fans, because they probably told him he should of caught three passes. Take a look.

Hopefully you caught the sarcasm here, because Odell Beckham has had a very rough game. When he puts up stats like these some people blame him, some people blame Baker Mayfield. No matter who you blame it’s clear the stress of the situation is wearing down Odell Beckham Jr’s mental. He’s had so many subpar performances in the browns Uniform.

Must Read  Chad Johnson aka Ochocinco Bragging About 2.2 GPA to His Daughter in Conversation About Yeezy's Goes Viral

The good thing here is the Browns are still off to a 4-1 start, but when team chemistry started deteriorating things can go left real quickly after this loss to Steelers. 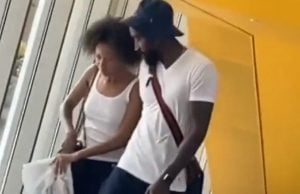 With Nets' season coming to an abrupt end after a first round sweep naturally the media has been very critical of Kyrie Irving. One...