How much is too much when it comes to the amount a rapper should charge for a verse. Over the years the hip-hop world has learned that some rappers charge the amount of a new home just for a quick 16. In many cases the money is worth it like in the case of Lil Wayne who famously was charging $100K a feature at one point. However, in other cases there are instances where the amount seems incredulous considering the level of stardom a rapper has. The beef going on between Desiigner and EST Gee focuses on that point.

In a viral IG Live video Desiigner reacted to EST Gee wanting him to pay $75 K for a verse on a song he’s creating. This really irked his nerves, and he really went in on him. Desiigner called EST Gee “trash” and “hot garbage” for thinking his verse was worth that much. It was like the hip-hop version of what Patrick Beverley did to Russell Westbrook on Live TV. Take a look.

Hearing EST Gee on a track with Desiigner would have been cool, but it looks like it may never happen now. Even if EST Gee were to lower the price for a feature, would he want to work with someone who called him ‘hot garbage’?

If you’ve ever smelled that before than you know how pungent that odor is. The bridges burned here probably will never be repaired. 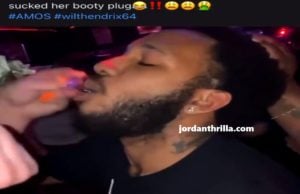 Zion Williamson elbowed Jake Layman in the face while dunking on him during Pelicans vs Timberwolves. Some people think Zion took a cheap...