Tekashi 6IX9INE has returned to social media, and with his reemergence he is back to taunting any and everyone to create a “buzz” around himself. In the process of doing so he is putting his family’s lives in danger, and he apparently doesn’t care. In fact the mother of Tekashi69’s baby mama Sara Molina claims he laughed at them being scared for their lives on a phone call recently.

To let the world know how scary this situation has become for his immediate family, Sara Molina urged Tekashi 6IX9INE enemies to kill him and his girlfriend Jade’s daughter instead of coming after her if they have problems. She was speaking directly to Tekashi69 when she said, “You have security, we don’t. You’re not invincible”. It appears he hasn’t taken any steps to keep his family safe, and he doesn’t even care. Remember this guy has a small daughter by Sara Molina, and he won’t even put security out there to protect them despite the fact that he knows they are being threatened because of him.

It’s sad that with all the money Tekashi69 claims to have that he has his small daughter literally living in danger. For example Memo600 vowed to slap Tekashi 6IX9INE’s daughter on Instagram Live very soon. After making that threat Sara Molina posted a message reminding them that hurting his family won’t affect him, because he doesn’t care about them, or so she claims.

A lot of people don’t like the way Sara Molina carries herself, but everyone should be hoping no harm comes to her due to Tekashi69 taunting people over and over again on social media only for his albums to flop anyway. 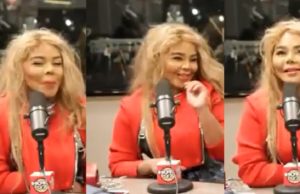 April 13, 2021
Was Biggie Smalls gay? This question is viral after Lil Kim revealed something very strange he used to do back in the day. According...