According to the transgender woman’s testimony the relationship with Pooh Shiesty started 6 months ago. He has allegedly been meeting this trans woman several times a month at various hotels, and would allowed their time together to be recorded. The trans woman is confused as to why he’s acting like they don’t know each other after she made one of their videos public. The question of if Pooh Shiesty smashed the transgender woman was answered as Nicki P claims they did make love. The trans woman accused Pooh Shiesty of living a lie for his fans, and urged him to live his truth instead.

Is this definitive proof that Pooh Shiesty is gay? Take a look at some of the thing his trans accuser posted.

This was the alleged video of Pooh Shiesty in bed with transgender woman that got this whole debacle started. The person in the video has the same arm tattoos and chains that Pooh Shiesty has.

Is this trans woman looking for clout, or is this situation the real deal? Somewhere Pooh might be sweating bullets, because if this transgender woman releases another video with Pooh Shiesty’s face showing it would be hard say the person is lying.

If Pooh Shiesty is gay he might as well come out the closet at this point, because this trans woman is on mission to force him out the closet. He needs to respond back with some concrete evidence proving the trans lady is lying to truly clear his name.

It’s still almost unreal to think that Pooh Shiesty’s career could be on the ropes due possibly smashing a transgender woman on the low. In history there are very few rappers that survived allegations like this from a public perception standpoint.

Trending Now  New Picture of N.O.R.E aka Noreaga with Hov aka Jay Z in 2022 Goes Viral

However, this situation happened just at the moment that he was truly turning into a mainstream superstar, which could be a sign that the trans woman is clout chasing. The evidence is compelling though. 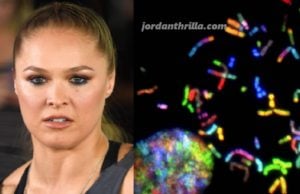 Ronda Rousey is Black And You Won’t Believe Who Her African-American...

Throughout the years many white people have taken DNA tests and found out their bloodline includes many...

It's official the Bucks beat Brooklyn, which means Nets are eliminated from the 2021 playoffs after acquiring Kevin Durant, Kyrie Irving, and James Harden....