NASA’s perseverance Mars Rover landed on Mars in February 2021, and since then it has sent pictures back that show evidence of primitive simple life forms such as fungus. Still yet, it hasn’t proven that there are signs of intelligent life forms on Mars, but based on recently leaked photos some people are convinced NASA is hiding evidence of UFOs and Aliens on Mars from the public.

Do Leaked NASA Images Discovered by Scott Waring Show a UFO Alien Base on Mars?

Leaked NASA images of Mars that Scott Waring of UFO Sightings Daily discovered in 2015 are going viral due to a strange object that can be clearly seen in them. The NASA photos show what appears to be a half-mile wide metallic disc embedded into a cliff on Mars that could possibly be a UFO Alien base. On closer look you can see this metallic disc possibly has windows that wrap around it.

In this image the color of the shiny metallic object has been changed so it you can clearly see it’s shape and detail.

NASA has not made any known public statements about this shiny disc object UFO seen built into a Mars cliff, but it seems a bit obvious that it had to have been built by something that isn’t human. Remember this isn’t a small object, it’s a half mile wide, meaning it’s around 2640 feet in length.

Could this be evidence that Aliens were on Mars at some point? Could that be an artifact left by a intelligent species that used to inhabit Mars? Hopefully one day we will get the true answers. 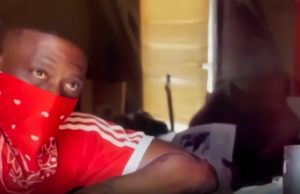 Is this the Funniest Scene from Lil Boosie Movie? Lil Boosie...

Lil Boosie's new movie 'My Struggle' is out, and it provides great entertainment with many classic moments....

As the battle between the NBA, Nets, and Kyrie Irving continues over the COVID Vaccine, many people in the media continue to attack him...