Imagine getting an invite to a major birthday party, getting a bunch of friends to go with you, only to realize poor event planning led to your seats being taken. This is a situation most people would assume could not happen to a star of the stature Jamie Foxx is, but at Cardi B’s birthday party he got treated like a D list celebrity, before the event staff realized the huge mistake they had just made.

According to reports Jamie Foxx was denied entry to Cardi B’s birthday party after he showed up with 10 his friends a bit late. Apparently he was told they were at capacity despite him allegedly being invited to the birthday party. Naturally Jamie Foxx wasn’t happy about this, but respectfully left the venue as they requested.

However, when the event staff realized the trouble they would be in they started begging him not to leave, but he wasn’t having it. Take a look at how Jamie Foxx’s reacted to getting kicked out Cardi B’s birthday party, he basically told them to keep that same energy.

Jamie Foxx Was Denied Entry At Cardi B’s Birthday Party & Made The Workers Keep The Same Energy After His Exit pic.twitter.com/teVfeHplDn

This situation seems a bit similar to the time Drake showed up to a party unannounced, and nobody knew who he was which led to him allegedly getting kicked out. Jamie Foxx’s situation is unique, because he was actually reportedly invited. He still ended up making a boss move by refusing to go back into the party when the event staff tried to stop him from leaving. Most likely Cardi B will hit him up with an apology.

The main aspect of livestreaming that captivates people so much is the fact that you get to... 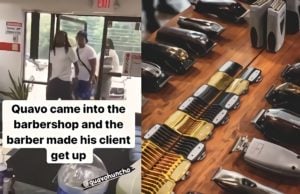