John Wall didn’t feel like talking to ESPN, so he played Spades instead. John Wall playing cards during an ESPN Interview on Live TV is going viral. As the hosts were trying to talk about the NFC East, John Wall was playing Spades during the TV interview basically ignoring them.

The whole video seemed like a moment where you’re talking to someone that’s talking on the phone with someone else at the same time.

Take a look at John Wall playing cards during an ESPN TV interview.

A few weeks ago he went viral for throwing up gang signs in a viral video. Now John Wall playing spades during a TV interview has him trending again. He has really been busy keeping himself in the news on social media.

John Wall playing cards during an ESPN interview is a legendary sports moment.

People React to Larsa Pippen Showing Up at Scottie Pippen House After Cheating with... 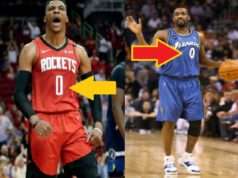 JordanThrilla - December 2, 2020
When news broke that Rockets traded Russell Westbrook to Washington for John Wall, history was made...

Did Lil Wayne Expose Ghostwriting for Drake on No Ceilings 3?...