The basketball world was shaken today when it was announced that CJ McCollum has a collapsed right lung. The extremely rare injury is almost never heard of in the NBA. This has many people wondering how it happened, which has led to conspiracy theories connected to his vaccination status.

On December 4, CJ McCollum left Trail Blazers’ game against Celtics in the 4th quarter, and hasn’t played since then. What’s confusing about the situation is that during the game there wasn’t any moment where he seemed to get injured or hit hard in his right chest area. Later on a CT Scan would show that CJ McCollum’s right lunged collapsed.

What caused such a rare situation like this to happen? Some people think the COVID vaccine could possibly be to blame. As you will see below the Trail Blazers are 100% vaccinated. One of the serious rare vaccine side effects that is most reported is blood clotting or circulation issues.

Here is an example one of many articles that reported about Trail Blazers being one of the first NBA teams to be 100% vaccinated.

According to Mayo Clinic a lung collapse (Pneumothorax) most often happens due to ruptured air blisters, lung disease, or a penetrating chest injury. However, in some cases a Pulmonary Embolism can lead to a lung suddenly collapsing. A pulmonary embolism is a blood clot that blocks blood flow to a part of a lung.

Some doctors claim that mRNA vaccines causes microscopic blood clotting that affects some people worse than others. Conspiracy theorists believe that could possibly have started the cascade of events that led to CJ McCollum’s lung collapsing unexpectedly. It’s not often you see something like this happen to a healthy individual without any obvious cause.

Whatever the case may be, hopefully he makes a full recovery. 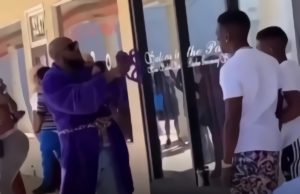 Lil Nas X and Lil Boosie are back in the news again, but the situation is a...

Sad news has hit the wrestling world that ECW's Jerome Young aka New Jack is dead at 58 years old. While the news is...